Happy New Year! I’m running a little late this week thanks to a round with the trending crud/flu that took me out of commission completely for about three days. I am rarely sick so it drives me crazy to not get all of my To Do list done. I think one of my goals this year is to not be so hard on myself. I am often my own worst enemy.

So do you make resolutions or set new goals at the beginning of the year? I always do. I like the feeling of a fresh start. About November I start pondering what did or didn’t happen that year and what I want to accomplish in the new year.

In 2017 life happened and most of my plans had to be put on hold, but I had set a goal of improving my knitting skills and learning how to knit socks. Little did I know just how important that seemingly little goal would be in 2017. I ended the year with two good pairs of hand knit socks and my first knitted sweater. That doesn’t sound like much but honestly I think my sanity was saved by knitting.

My actual amount of knitting included four prototype socks until I found two patterns I liked and managed two finished pairs of socks. So how did my knitting goal save my sanity? I am a born maker. I think with my hands more than my brain alone. All through school I got in trouble for drawing in class. It has now been proven that students who draw in class retain information better. Unfortunately back in my day, the teachers didn’t believe me when I told them that.

I had already started working on socks when my sister-in-law died and I had yarn on the needles. When Miss L. came to live with us, our newly painted and remodeled guest room/office/studio became her room. Suddenly my life line of creative endeavors got packed up and sent to storage. I was left with just my drawing pencils, paper and my knitting. I no longer had my paints that I had enjoyed so much in the previous year and was making vast improvement with. My easel is a big, complicated travel easel that would not fit anywhere in the house now. I will be honest. I was heartbroken. Anyone who has a creative drive will understand. It’s like oxygen for us. We HAVE to do it to be a tolerable, stable human being.

Knitting became my only outlet. There was so much going on during the past six months that I rarely had time for anything more than a row of stitches in stolen moments or in the middle of the night during weeks and weeks of insomnia as my poor brain tried to solve some great big problems. I’m very thankful for the two commissioned drawings I had this year. They gave me the opportunity to keep my drawing skills fresh and something to focus on besides what was going on around me and feel a little more normal.

When I say that knitting saved my sanity, I mean that the rhythm of the needles calmed me when the stress was overwhelming, the beautiful colors and texture of the yarn fed my soul, the difficult parts of the pattern focused my mind on something away from the frustration I was feeling and I could escape the world for a little while with my earbuds, some music and my knitting. I will forever be thankful that the simple act of making something got me through such a difficult time. The people that live with me will also be thankful!

To top it all off, I now have the MOST cozy, comfortable socks and sweater that I have ever owned.  Now I know why some knitters get addicted to sock making. 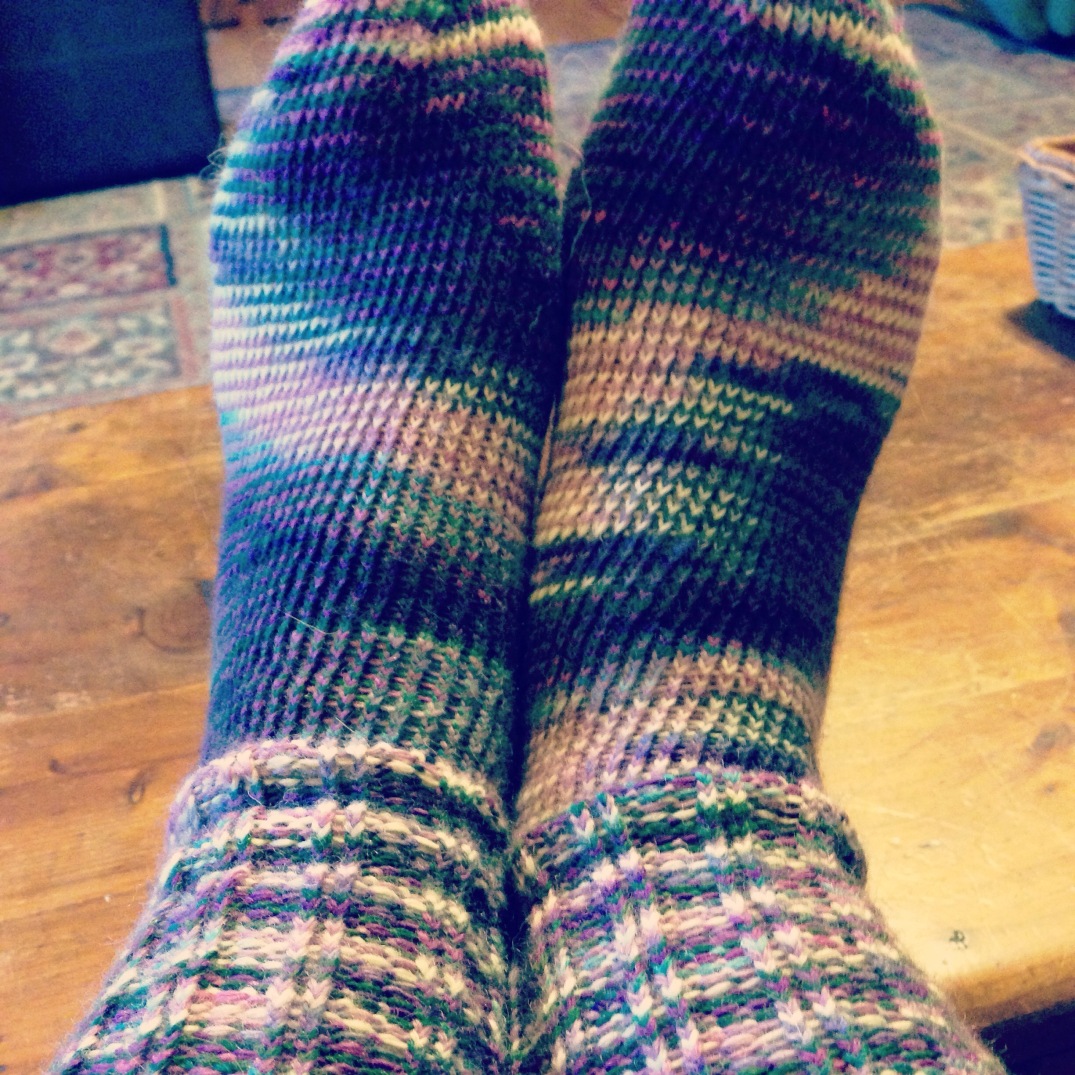 So, what is on my 2018 goal list?  Lots and lots of making!  I already have a new project on my needles but it will be a gift so I can’t divulge more than that right now. There are actually several gifts on my list. Miss L. and I will be sewing some gifts and hopefully some clothes for ourselves.  I am IMPATIENTLY waiting on my new table easel that was delayed by the snow storm. THERE WILL BE PAINTING DONE THIS YEAR! I will fill in details as I go along in the year. 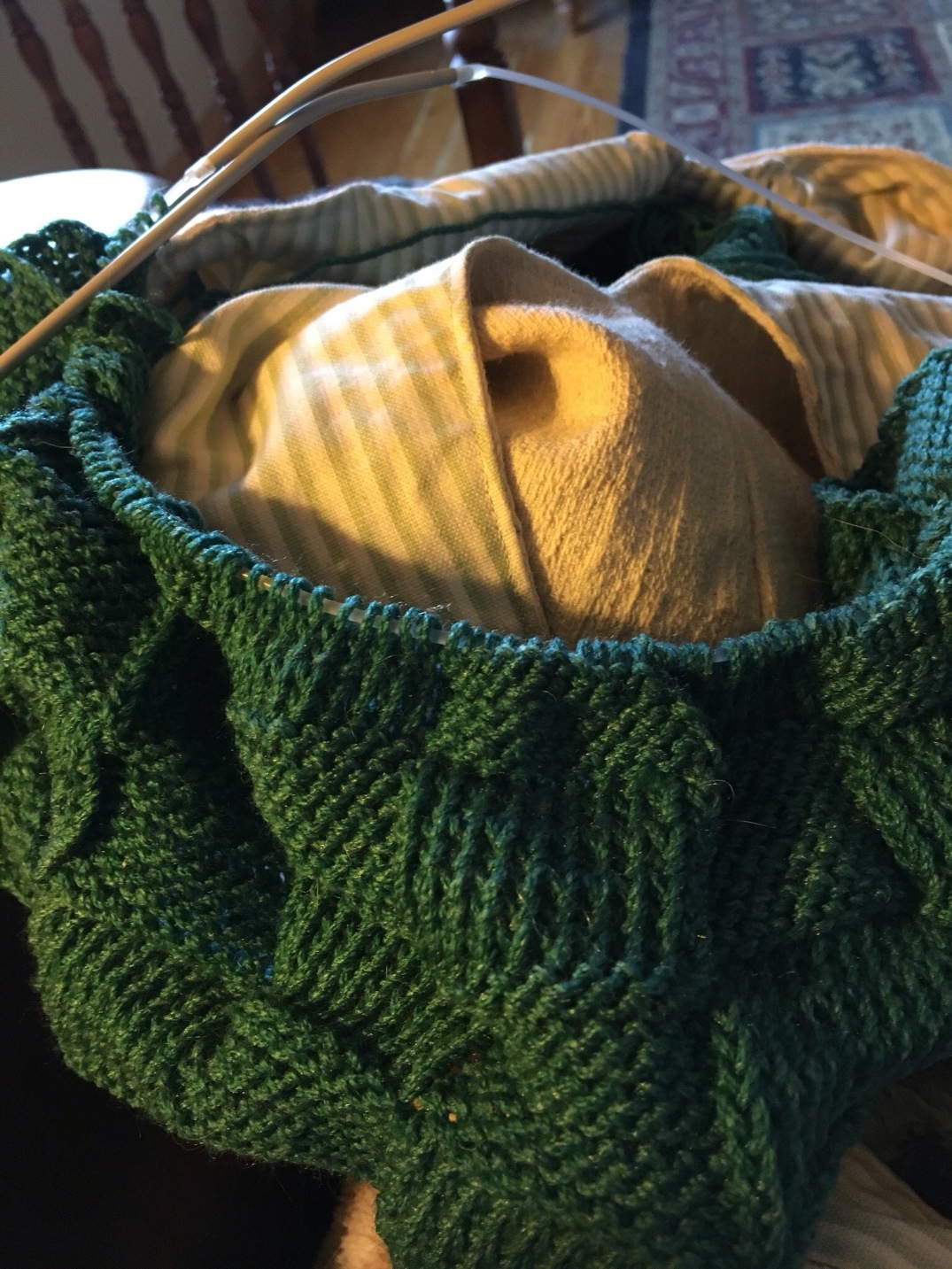 2018 is starting out with a feeling of relief of surviving 2017, a settling into the new normal for us, an appreciation for the simple, everyday joys and a looking forward now. 2017 involved much looking into the past and though it wasn’t my past, it was hard to watch the sadness and pain that those near to me were suffering.  It’s good to see smiles, hear laughter and sense peace in them now.

I wish you all a beautiful 2018. Go make something good.