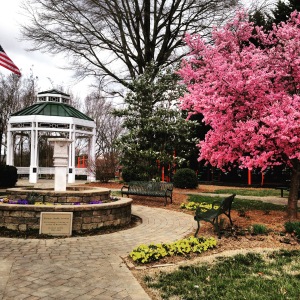 It is finally here. Spring and the official start to the floor tiling extravaganza. I know, you have been hearing me talk about it for months now. There may have been a little avoidance/procrastination going on coupled with some unexpected family commitments to delay the process. If all goes well this weekend I will post a photo or two to prove I actually did stick tile to floor.

This past week has consisted of more Spring cleaning than creative endeavors. Yard work last weekend while we had some decent weather then digging things out of storage to be donated to a couple of fundraising yard sales in April as well as a big town recycling event. Time to get rid of the ancient VHS players and old cell phones.

Last Sunday we had a conversation in church that has amused me all week. Who knew that a coffee pot could  cause so much division? Have you ever thought about your personal little pet peeves and quirks? How did you acquire them? I think many of them are passed down through our families. You know, the “that’s the way it’s always been done” effect. Some are in reaction against the way it was done in our families. My sister and I will never wash dishes the way our Mom does because we had to do it her way growing up.

The same quirks you thought were charming in someone when you were dating will drive you to the brink of insanity after a couple of years of marriage. Wars may very well have started over quirks.

Our quirks are part of what makes us each unique beings. As hard as it is sometimes, we really should appreciate and celebrate the quirks in each other. Why does the way someone carries their money in their purse make someone else crazy? Or how towels get folded? That’s one of mine. I fold towels a certain way and that’s the way I want them done. Yep, much of it comes down to control issues. Does it really matter how the towels are folded if they are put up in a cabinet and very few people actually see them? It does to me!

How do you handle someone else’s quirks? How do other people handle yours? Can you find a way to appreciate them or at least compromise before World War Three breaks out?

I have claimed responsibility for my towel folding obsession and just do it myself rather than subjecting family members to “my way.” The same goes for the dishwasher. Have you noticed that the dishwasher is a HUGE issue? It is now understood at my house that my rearranging the dishes is not a statement of anyone else’s inadequacy, but just a hang up of mine. Well, that and the fact that my way is better!

So what was the subject of the church discussion?  One of “my kind” sinned by taking a cup of coffee from the pot that had not yet finished the brewing process. This set off a protest by D’s “kind” that the “sinner” had now effectively ruined the pot of coffee for everyone else! It was soon determined that the class was almost evenly split between the two coffee obsessed factions. It was left to the non-coffee drinkers to mediate. We consider them “heathens”, but for continued peace, love and understanding with our Christian brothers and sisters we practiced forgiveness and grace.

May your week be filled with understanding and grace for others and yourself. Happy Spring and Happy Easter!